CS:GO has set a new record for peak players in a 24-hour time period, continuing on its rapid growth in 2019.

The first person shooter got a massive influx of new players when Valve made the game free to play in 2018. The subsequent year saw CS:GO fans welcome a new operation in the game, Operation Shattered Web. CS:GO’s numbers have been steadily climbing ever since.

There were more than 900,000 players playing CS:GO, breaking its previous record of 874,875 during MLG Columbus 2016. Luminosity Gaming defeated Natus Vincere in the Major’s Grand Finals. Natus Vincere remains one of the few Tier 1 organizations without a CS:GO Major title to their name.

CS:GO has seen a consistent increase in player numbers over the past few months. Operation Shattered web has provided a significant boost to CS:GO player numbers. The FPS game has surpassed the other popular Valve game, Dota 2. 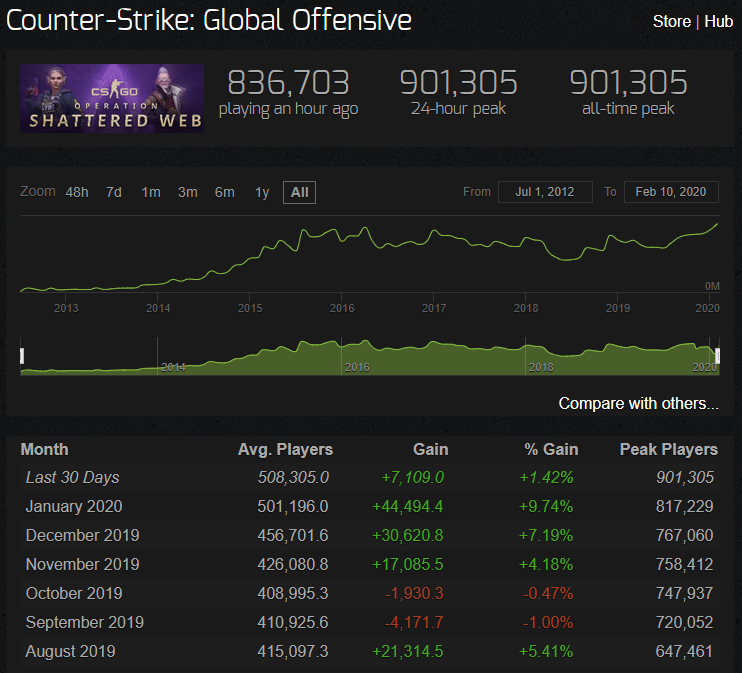 The CS:GO player count has steadily increased over the past few months.

ESL will host the next CS:GO Major in Rio de Janeiro, and the influx of new Brazilian CS:GO fans is bound to increase the numbers even further. Valve has also initiated several measures to improve player experience in the game. The new AI-based system will automatically mute toxic players in-game.

This is the perfect opportunity for tournament organizers to use the increasing player numbers to their advantage. BLAST, ESL and FLASHpoint have announced exclusive leagues for 2020, and will feature the top CSGO teams in action.

The FLASHPOINT league will see a $2 million prize pool and will allow teams to own part of the league. The profit-sharing based on team ownership is a new business model in CSGO esports, one that will hopefully help teams cement a sustainable business model.

Is Complexity's Performance At BLAST a Sign of Things to Come?
Next