The latest CS:GO update adds the Fracture case which brings over 17 new cosmetic weapons to the game. The game also receives several networking changes that will significantly improve the in-game experience.

For the past few months, Valve’s CS:GO focus has been on new maps and gameplay balance updates. The developers have now released a cosmetic update adding a new weapons case to the game. The Fracture case contains seventeen unique community designed skins including new cosmetics for terrorist and Counter-Terrorist players. 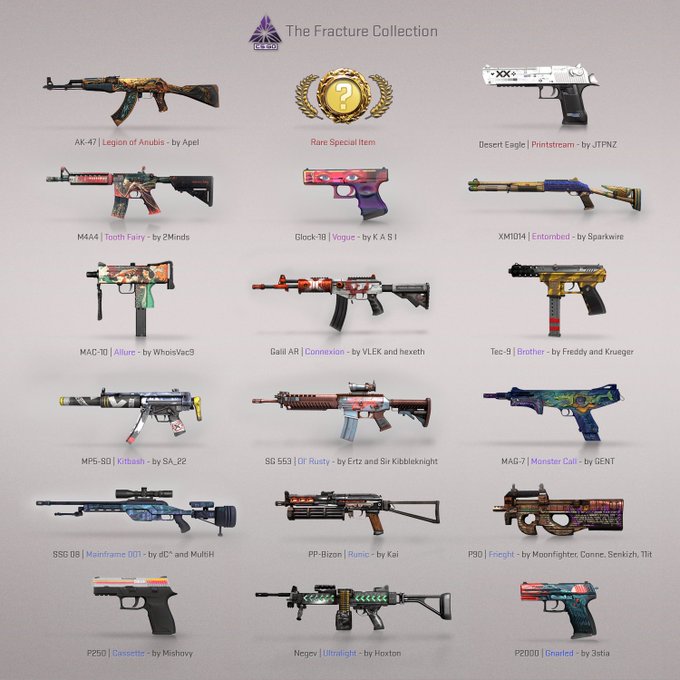 Here are the seventeen new cosmetic weapons as part of the Fracture Case. Image Credit: CS:GO.

The weapons collection include cosmetic skins for different weapons. The Fracture case is available for purchase in-game for

The update also updates Anubis and Mutiny maps. Valve added these two new maps to the matchmaking pool last month replacing Chlorine and Jungle. While the updates focused on balancing these maps for competitive play, some changes were also aimed at optimising performance on the maps.

CS:GO esports has will return this month with the DreamHack Open Summer 2020 and ESL One Cologne later in this month. As top teams prepare for their first official match in months, the CSPPA has tied up with two universities to survey and study mental health in esports. The study will allow the players association to support its members and provide resources for players to deal with stress and pressure of playing competitive video games.

Here are the full patch notes for the August 6 CS:GO Update.

North bids farewell to its Counter-Strike team: a retrospective