The Esports Admin Should Have the Final Say

Over 100,000 viewers tuned in on Alexandre “gAuLeS” Borba’s stream to watch the battle of the best Brazilian CS:GO players. MIBR and FURIA played against each other in the upper bracket round 1 of the BLAST Premier: Spring 2020 American Finals. However, a controversial technical pause and a subsequent restart has put the focus back on the role of a referee in esports.

MIBR won the series with a 2-0 score upsetting the higher-ranked FURIA. However, CS:GO fans witnessed the two teams arguing on social media.

What Happened between FURIA and MIBR?

FURIA and MIBR were playing on Inferno and on a server that was posing problems to both teams. While I feel the tournament organizers should have rescheduled the match or changed to a more favorable server, things went ahead as planned.

The score was tied at 12-12, with both teams having a risky economy. A loss in this round would mean a massive disadvantage for the losing side. Fallen typed ‘NL’, which is short for ‘Not Live’ at the in-game time of 1.28. The game immediately went into a technical pause as the teams deliberated whether to continue the round.

From Fallen’s perspective, he called for a restart when he thought the round could still see a restart. According to the tournament rules, a map round can restart if there is zero damage to any player in the server. Unfortunately for MIBR, they had already dealt five damage to an enemy player with a grenade. This meant the onus was now on FURIA to accept or deny the restart request.

Players from MIBR and FURIA joined the match admin in the discord server to discuss the next course of action. According to sources, FURIA players left the decision to their coach and organization CEO. At the same time, Fallen took to social media to post a clip of the freeze and how it was unplayable for them.

Experiencing lots of spikes during the whole match. Lost 2 situations middle round where obviously nothing could be done. We understand it.
12×12 nothing happened but our Grenade landed 5hp damage on one of the opponents. We froze 1:37 until 1:28. pic.twitter.com/i2yaYXMhKB

FURIA’s CEO decided to replay the round. We don’t know whether it was a decision under pressure or if he would have made the same choice regardless. MIBR won the map and later secured the series by winning Vertigo. This incident brought up a controversial topic that has plagued CS:GO esports for several years. Should technical decisions such as round restarts be left to teams and players?

What makes matters worse is that the ruling is technically against the tournament rules. According to segment 10/6/3 of the rulebook:

If the issue takes place during a round after damage has occurred and the outcome of the round can still be determined (e.g. a single player has dropped but others remain) the round will continue to be played and count.

The rulebook (concerning this topic) does not say that the final decision should be left to teams and players.

CS:GO Players Should Not have to Make the Decision 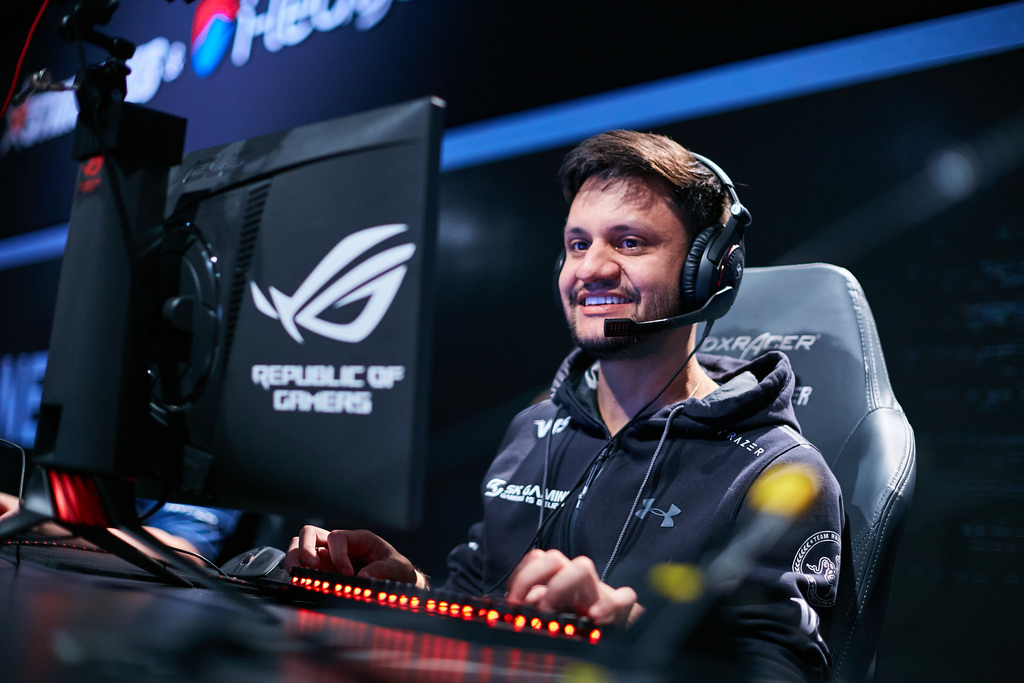 Esports can learn from physical sports, that have decades of experience in dealing with tough decisions and rulings. In physical sports such as basketball and football, the final decision is with the referee or the game administrator. While teams and players often lobby the referee to decide in their favor, referees are notorious for going against the flow. They decide that they feel is the right choice and which is fair to all parties concerned.

This is in stark contrast to esports, where players have had the final say in deciding the technical aspects of the round. If the players feel that replaying the round is in their  best interests, they will agree. Unfortunately, such a scenario can and often leads to arguments and clashes over the final decision. Esports is no longer a small industry and every tournament organizer has laid out specific rules for certain scenarios. Match referees can use these rules to help them in making the decision.

The final say in the decision should always be with the admin. CS:GO esports has seen similar situations in the past when one team has received community abuse due to their ‘unpopular move.’ Team Liquid decided not to replay a round against Luminosity Gaming, a decision that was solely within their rights. However, it was an unpopular move and the CS:GO community took to social media to harass the players and remind them of their ‘wrong’ decision.

If FURIA had decided not to replay the round, there was a high possibility of Brazilian fans turning on them. Fallen had already posted the video on social media. There was a lot of pressure on FURIA to bow to the popular decision.

As former Head referee of ESL tournaments mentioned on twitter, more rules can often be a huge problem for referees in individual situations. 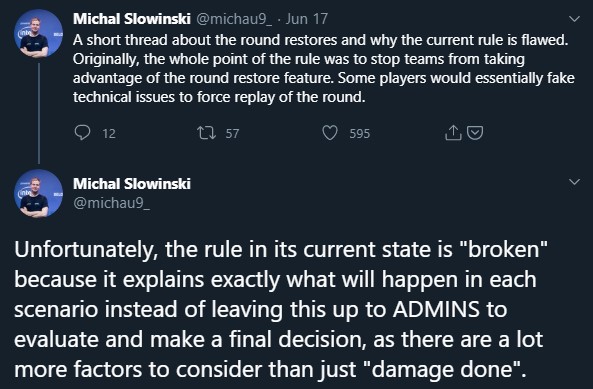 Michal says that the final decision should be the admin’s sole discretion.

Admins are in a unique position to see all sides of the situation and take a neutral and fair decision. However, if there are specific rules for every case, the admin cannot make a ruling on a per-case basis.

He describes situations where teams misuse the rule to stack a bombsite. As soon as they realize that they have stacked the wrong bombsite, they will call for a restart to the round.

The admin/referee is bound by the rules to restart the round. Technically, neither team has taken any damage and there should not be any problem to restarting the round. However, it gives the defending team another chance to stack the right bombsite and the round’s outcome could be significantly different.

In this situation, if one side has done team damage, it could prevent a round restore.

The intention of the rules might be correct, but the implementation will face a problem when rules are allowed to be too specific. Tournament organizers should give more powers to admins and game referee and enable them to make a per-case ruling. The rules should serve as guidelines to help them in the decision, but not as the final say in the decision.

The Winners and Losers of PGL Major Antwerp