Riot Games has revealed the abilities of yet another Valorant Agent. Sage’s ultimate bears a resemblance to Overwatch’s Mercy, although the rest of her skills are unique and innovative.

Who Is Sage in Valorant?

Valorant is Riot Games’ latest FPS title and promises to enhance the user experience in FPS games. With a heavy focus on anti-cheat and better performance, Valorant can appeal to FPS players from Overwatch and CS:GO. Despite featuring agent abilities similar to Overwatch, Valorant has a higher emphasis on player aim to help define the outcome of a round. For CS:GO players who found the transition to Overwatch difficult because of the numerous stuns and shields, Valorant could be the perfect fit.

Sage creates safety for herself and her team wherever she goes. Able to revive fallen friends and stave off forceful assaults, she provides a calm center to a hellish battlefield.

Riot Games has announced details about Sage, one of the few agents that will be present in-game at launch. Sage is a Chinese-origin agent whose abilities signal a support playstyle.

Being a support, Sage will play behind her teammates, constantly healing them to enhance their efficiency in a round. Needless to say, Sage’s abilities make her one of the prime targets for opposition DPS players.

What Are Sage’s Abilities?

How To Buy Valorant Agent Abilities? 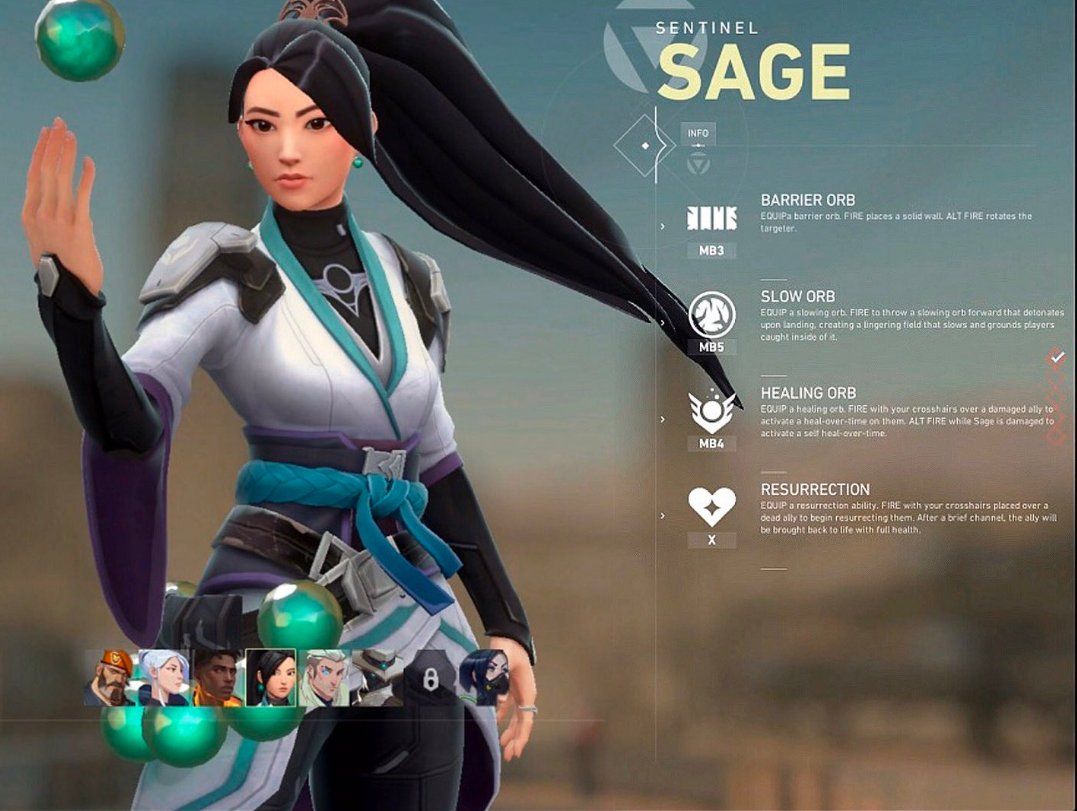 Valorant players can choose a combination of the agent’s four abilities to gain an advantage in their matches. While every agent has four abilities, including one ultimate and one signature skill, players need to purchase the remaining two abilities.

Valorant is a healer. Her signature ability is the Healing Orb that allows her to support her teammates and nurse them back to full health over time. Her ultimate works similar to Overwatch’s Mercy as it can revive fallen teammates with full health.

However, players still need to buy her ‘Slow Orb’ and ‘Barrier Orb’ abilities. Similar to how buy rounds work in CS:GO, Valorant players can purchase abilities before the start of a round. The players’ economic health and strategy for the upcoming round impact their decisions, including which abilities to buy, or whether to save money for a better buy in the next round.

Meanwhile, esports players can expect more Valorant news very soon. Several streamers have their day marked busy on March 27. The initial public beta testing date was scheduled for March 11-12, 2020. However, Riot Games canceled the event to prevent a large gathering due to the coronavirus outbreak.

With several streamers hinting at a March 27 Valorant event, it could signal a sooner-than-later Valorant beta release.

CSGO needs a map pool refresh more than ever

OG’s CSGO team enters in a rebuilding phase; what’s next for the team?

Karrigan returns to FaZe Clan CSGO: a quick look at his new team